On to the Sacramento Kings, who lived more of a Jester’s life…

Postmortem: A million gallons of ink have been spilled over the hilariously dysfunctional Sacramento Kings in the last 18 months, so in an effort to not beat a dead horse we present a simple timeline. Here are the broad strokes of the Kings’ very public self-shaming: 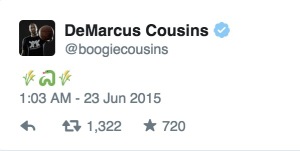 Low Moments: See above. Garth Brooks was singing about the Kings when he said “I got friends in low places.” Low is their MO.

One extra clip just for laughs: here’s Rondo getting called for consecutive delay of game technicals in a game against the Thunder, when he was unable to catch the ball from the ref on an out of bounds play in a timely fashion – twice!

Bright Spots: I mean, for all his faults, Cousins is still averaging 27 points and 12 rebounds on a nightly basis. He’s the most dominant center in the game and an ideal piece to build a franchise around. Until he gets pissed off.

Also, rookie 6th overall pick Willie Cauley-Stein looks to be the Kings’ first successful draft pick since Cousins, with a frenetic defensive-minded game in the mold of Joakim Noah. WCS is a real asset, posting per 36 minutes averages of 12 points, 9 rebounds and 2 blocks.

Assets: The most disappointing part about this failed season is that the Kings added real talent in the offseason with eyes on finally getting back into the playoffs. Dysfunctional ownership/management, poor strategy and the endless supply of on- and off-court drama derailed those plans. But the cupboard isn’t bare, either. Here’s how I’d rank their assets:

Free Agency prospects: They might lose Rondo this summer to free agency, which won’t necessarily be a bad thing. Aside from his gay-bashing, he’s also weirdly chased assist numbers this season. It’s been uncomfortably noticeable at the end of games, which would seem to suggest he’s fattening up his numbers to make himself more attractive to teams with big checkbooks. If he’s gone, that will leave the Kings with around $20M in cap space. Trouble is, Sacramento is not a destination for NBA free agents, and all the turmoil there won’t have players lining up to join the circus. And chances are good that Vivek and Vlade won’t see eye to eye on potential signees and the discord will be shared publicly. That’s just how the Kings get down.

As far as needs, they have a lot of them. More shooting, more defense, a new point guard and very likely a new coach.

Resurrection Scale: 5% (Animals are Carrying Off the Remains). Vivek resurrected this team for the city of Sacramento after the Maloof Bros. went broke and the team was expected to move to Seattle. He then proceeded to immediately shovel dirt back on them.