Pelicans haven’t been this decimated since the BP oil spill. Too soon? My bad… 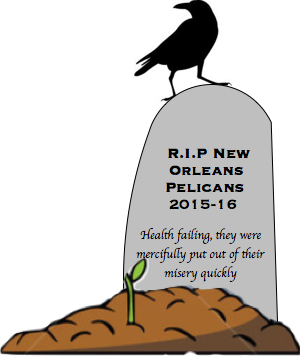 Postmortem: The Pelicans’ 2015-16 campaign never had a chance, in hindsight. After winning 45 games a season ago and making the playoffs for the first time in Anthony Davis‘ young career, they came into this season with a hot new coach (Alvin Gentry) and high hopes for continued improvement. Davis signed a 5-year extension in the summer and was a trendy preseason pick for MVP. Everything was coming up roses. Then actual games were played.

The Pelicans started the season 1-11 as it became apparent that years of GM Dell Demps treating first round picks like hot potatoes and a crushing slate of injuries had doomed the team. Lost amid the hype of Gentry’s arrival – fresh off a title as an assistant for the Warriors – was that he came to New Orleans with an unimpressive 335-370 record as a head coach. It was clear early on that he wasn’t going to be a magic pill, especially given a depleted, injury-riddled roster that Red Auerbach would have trouble turning into a winner. Gentry’s plan for an up-tempo style has led to the 8th-highest pace in the league, but their shooting percentage and scoring have gone down and an already bad defense has regressed. For whatever reason he hasn’t started Holiday and Ryan Anderson together all season, even though they’re the second and third best players on the roster.

Let’s take a deeper look at Demps. He struck gold in 2012, winning the Lottery and drafting the ultimate franchise player, Anthony Davis. The Brow was an immediate star and became one of the best under-23 players in NBA history. Demps thus had the most elusive piece of rebuilding a team in place – a young cornerstone. Then he went haywire. Feeling pressure to surround his star player with talent in the post-LeBron Decision era, where executives remembered superstars don’t want to waste valuable years and will jump ship if not satisfied, Demps made two killer panic trades. He traded his 2013 1st round draft pick Nerlens Noel and his 2014 1st rounder to Philly for Jrue Holiday. A year later he traded his 2015 1st round pick as part of a package that brought Omer Asik and Omri Casspi to the Pels. Noel is now a strong rim-protector and an asset for Philly, while Asik is practically unplayable due to his lack of quickness at the 5. Holiday was damaged goods, which Philly had to pay restitution for (a paltry $3M) but he’s been good this season as his health has returned. Even so, the 1st rounder they gave up could’ve been used to draft a point guard like Elfrid Payton on a cheap rookie deal. To sum up, instead of teaming Davis with Noel and two more 1st round picks, Demps gave the Brow Asik, a constantly banged-up Holiday and zero blue chip rookies. Desperate to avoid replicating LeBron’s 2003-09 Cavs, Demps inadvertently turned the Pels into Cavs South.

On the injury front, the Pelicans entered the season with six key players on the mend. They had to start Kendrick Perkins in Game 1 against the Warriors (the result was a predictable 111-95 defeat). At various times Tyreke Evans, Eric Gordon, Quincy Pondexter, Asik, Norris Cole, Luke Babbitt and Alexis Ajinca missed multiple games, while Holiday played most of the season on a minutes limit. An already thin roster (thanks Dell!) became anorexic and even the great Davis couldn’t keep them afloat.

Low Moments: Two of their first three games were against the Warriors, not a way to soften the blow dealt by the injury bug. They lost those two games by a combined 30 points while Steph Curry lit them up for 93 points and 13 threes.

Most observers (myself included) couldn’t quite believe the fall from grace was real, and there was much talk after the 1-11 start that the Pels still had time to turn it around. Since it was not a normal strong 1-8 year in the West, hope abounded for a time. But after that terrible start, they’ve gone just 23-30, never managing to put together a run to get into the mix. Unfortunately the GM is the last one to realize the team’s fate, leading to an awkward moment after blowing a March 3 game to Houston when Gentry finally admitted they were out of it, only to have to apologize for some reason the next day. Face it, Dell, it’s been time to tank.

Holiday spent most of the season on a minutes restriction in order to ease him back after his leg injury. As the team continued to plummet its second-best player was only on the floor around 15-20 minutes per game. However, he has been given starter’s minutes since March 3. So in essence, the Pels played the long game with Holiday until they lost enough to lose all playoff hope and now that the games don’t matter, he’s playing big minutes. This makes no sense. What is the upside to this strategy? They’re drawing up plans to avoid the iceberg as the Titanic is sinking into the sea.

Bright Spots: Really the only bright spot is Davis. You can forgive him for some minor slippage in counting stats from last year due to the train wreck that surrounds him in New Orleans. It’s the first season he hasn’t statistically improved from the year before. But don’t fool yourself: Davis is the real deal and maybe, given his young age and enormous ability, the top pick if there was a redraft of all NBA players. For those of us who put him on the back burner in this lost season, he forced his way back in the public consciousness with an eye-popping 59 point, 20 rebound game against Detroit on Feb. 21. He just turned 23 and did things few have ever done before their 23rd birthday, per ESPN. From that ESPN article, which you should check out in full:

Assets: Things are not good. But they have Davis, who gives you a healthy margin for error in other areas. Unfortunately they have used up just about all that margin and cut their legs out from under them by trading 1st round picks. Here’s how I rank the Pels’ assets:

Free Agency prospects: They figure to probably lose Anderson, Gordon, Gee and maybe Cole in free agency. If they lose all four they will only have 10 filled roster spots, not including whoever they take in the Draft. They will have about $20M in cap space to spend. They have an advantage in that Davis is locked up long-term, so free agents can be enticed by the prospect of playing with Brow. They may not be able to afford a guy like DeMar DeRozan or Bradley Beal without going into the tax. On paper, Beal fits well with them, but this team can’t take on anymore injury-prone guys. A 3-and-D wing like Nic Batum, Harrison Barnes or Kent Bazemore would certainly help. Ajinca is not the answer as the full-time starting 5 next to Davis, so an athletic rim-protecting center like Festus Azili should be on the menu for Demps.

Resurrection Scale: 25% (Rigor Mortis Setting In). The only reason they aren’t at 5% is because they have one of the seven best players in the league. Things need to turn around soon before we waste any more AD prime years. As fans we should expect and deserve to see him play in meaningful games. Demps can not afford another blunder, or else #FreeTheBrow will be trending on Twitter in no time.