The start of March Madness obscured a momentous night in the West. So what changed in the all-important playoff race? Doc Rivers is pissed at the refs after a loss to Houston knocked the Clips down too ninth, so nothing new there. The Spurs won a huge game over the Pelicans to get back to the 8-seed. Utah kept winning. So did Portland, despite LeBron James ruining Jusuf Nurkic‘s year with this masterpiece:

In a big change, Denver beat a team that they’re better than (the Pistons), yet may have lost Gary Harris to a knee sprain for some amount of time. They can live without him Saturday against the terrible Memphis Grizzlies, but the Nuggets schedule soon gets brutal. So let’s hope Garris is back at 100 percent soon or we can wave goodbye to the 10-seed Nuggets.

Finally, since Tuesday, the ever-changing 4-5-6 slots have shuffled again. OKC is leading the pack, followed by Minnesota and New Orleans. 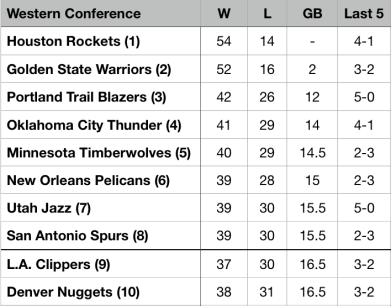 Tonight’s slate is light, with just one crucial game between the Clippers and Thunder, while the Warriors’ B team takes on the Kings’ F team.

Clippers @ Thunder – Recently OKC had done its job by racking up wins against pitiful teams. Now the fun begins. They have 12 games left on the schedule and the first 11 of them will be mighty struggles against the league’s best. They’ll need to win at least six of these games if they hope to cling to a top-4 seed and homecourt advantage in the first round. Worst case scenario could even see them missing the playoffs. That’s how tough this stretch is, with road games at Toronto, Boston, Houston, San Antonio and New Orleans on the horizon. A win tonight over Doc’s Clippers, who are playing for the second time in two nights, is almost mandatory. My pick: Thunder 111, Clippers 103.

Kings @ Warriors – No Steph. No Klay. No Durant. Maybe no Draymond Green. It’s smart that the Warriors are letting their stars heal, but will it cost them against the Kings, who’ve already beaten them at Oracle this season? No.