Today we gather not to mourn the 2015-16 Denver Nuggets, but to celebrate their afterlife… 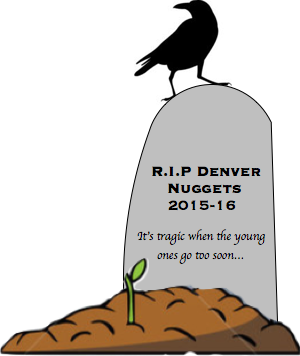 Postmortem: The Nuggets entered this season with a relative unknown rookie point guard (Emmanuel Mudiay, 5th overall pick), a new coach, a collection of unproven young players and a dearth of star power. In essence this team’s rebuild goes all the way back to the Carmelo Anthony trade in 2011. George Karl was out two years later and the Nugs hit their nadir under the woeful Brian Shaw coaching regime. Malone was brought in to right the ship and was a great hire. He would probably never concede this but the playoffs were not realistic for Denver this season, with a young team coming off a 30-52 season. Malone’s main charge was to give this team an identity while developing talent. The most important project is Mudiay, a big point guard who tantalized Nuggets fans early on with typical first-year PG stat lines – i.e. 17 points, 9 assists, 5 rebounds and 11(!) turnovers in his pro debut. Early in the season Mudiay leaned a bit too heavily on his jump shot and committed turnovers at an alarming rate. He then missed 14 games in December/early January due to an ankle injury, pausing his development momentarily. The Nuggets suffered through an array of other injuries to Jusuf Nurkic, Wilson Chandler, Kenneth Faried, Jameer Nelson and Joffrey Lauvergne. After a semi-surprising 6-6 start, these mounting boo-boos were much to blame for an 8-game losing streak and general tailspin that dropped them out of the race by December.

The Nuggets have largely played hard in the face of another losing season, a nice reflection on their energetic, bullish head coach. They feature five rookie or 2nd-year players, four of whom have made a name for themselves with only Nurkic regressing after his surprise rookie season. GM Tim Connelly has done amazing work stockpiling assets, which we’ll get to in more detail below, and in Malone he has a perfect coach for developing diamonds in the rough like Will Barton, Gary Harris and Nikola Jokic.

Low Moments: The 8-game losing streak in November set the bar pretty low; they didn’t just lose but got creamed in that stretch, falling by 12 points a game. There was a 6-game losing streak starting in late-December while Mudiay was out. But the lowest lows for this team of youngsters were two season-ending injuries to veteran leaders; Wilson Chandler (hip) back in late October and Danilo Gallinari (ankle) at the end of February. Gallinari in particular was having one of his best seasons before succumbing to yet another serious injury.

Twice in their first 10 games, the Nuggets lost by 24 points, to OKC and Phoenix (before the Suns fell off a cliff).

Bright Spots: Denver quietly put together the dream 1-2 punch of a savvy front office off the court and a talent development factory on the court. The efficiency of this machine they’ve constructed is astounding and a blueprint for mid-market teams looking to rebuild on the cheap. Connelly has a knack for combing Europe for little-known talents, as well as picking up lesser-hyped prospects domestically. Malone and his staff are getting the best out of these hidden gems. They found Jokic in Serbia and drafted him in the second round last year. It took less than a month into the season – Nov. 18 to be exact – for the Nuggets to realize the 6’10” versatile power forward could be something special. On that night he notched 23 points, 12 rebounds, 3 blocks and 2 steals off the bench in San Antonio, a team that has a few star big men of their own. Jokic was picked for the Rising Stars game at All-Star weekend while putting up a 17, 11, 1 and 1 per 36 minutes for the season. He’s become a key member of the starting lineup. As for Mudiay, after a shaky and injury-riddled start he’s proven to be the point guard of the future and potential franchise cornerstone. He’s displayed an uncanny ability to get to the rim, as Hassan Whiteside found out on this monster dunk. He’s getting better with experience, averaging 20 points and 7 assists so far in March.

The Nuggets also developed wings Gary Harris and Will Barton into real assets this season. Here are there numbers from last year to this year:

The Nuggets are also the proud owners of one of the six losses dealt to the Warriors this year, beating Golden State 112-110 on Jan. 13. They also swept the Raptors and recently beat the Clippers in a game that showed their vast potential on the defensive end.

Assets: The cupboard is beyond full, as Connelly has signed players to smart deals and hoarded first round picks. The Nuggets will have the luxury this offseason of having cap space while also having all their key players under contract. They won’t have an empty bag even if they miss on a big free agent. Asset ranking:

This Nuggets team is LOADED with assets.

Free Agency Prospects: If Darrell Arthur opts out of his deal, the Nuggets will be committed to just $59M in salary entering this summer. And that’s with 11 of their top 12 players under contract! Connelly earned his recent extension for sure. The Nuggets will have the money to offer a max or maybe two in free agency. They have their point guard of the future and, unlike a lot of teams, they have their 2 guard spot covered with Barton and Harris. Gallo may not be a long term answer at the 3 due to his injury history, so they should go after a star small forward. They won’t get LeBron or KD, but Harrison Barnes, Chandler Parson or Nic Batum would be great targets. They should make an offer to Andre Drummond for sure, Hassan Whiteside maybe and Dwight Howard if they want to make that kind of splash.

They have options and flexibility which is enviable in the NBA. One thing to keep in mind, though, is with likely three picks in the first round of the 2016 NBA Draft, they will need to allocate three roster spots to sign those picks. That’s assuming Connelly doesn’t have any draft-day trades up his sleeve.

Resurrection Scale: 90% (Halfway out of the Grave). They were never going to contend this season, but they’ve made just about all the right moves and a decidedly non-Denver philosophy of defense is developing. They could be in the playoffs next season.

One thought on “NBA Graveyard 2016: Nuggets Die With Dignity”