Here’s a funny stat: the top four teams in the West are on a combined 42-0 run. How could this be? I’d argue it’s a mix of transcendent individual performances (Dame Lillard, Anthony Davis, James Harden, Steph Curry, Kevin Durant) and the prevalence of tanking teams throughout the league to for these giants to bulk up against. You hear a lot of chatter about this tanking dilemma as it pertains to top-heaviness, so let’s look at the recent streaks of those at the top.

Just five of the Rockets’ 17 straight wins have come against bottom-feeders, which makes their incredible run all the more impressive. Half of the Pelican’s 10-straight wins have been over bad teams, with a fairly small average margin of victory. Likewise, half of Portland’s 8-straight wins have come at the expense of tankers but the Blazers have flexed their muscles a bit more in those games. The Warriors have beaten three tankers in their 7-game run. So excluding the Rockets, about half of these win streaks have been built on sand. Yet, is this any different than most NBA seasons? There may be more outright tanks jobs than normal right now, but by March every year there are teams who have lost hope and have their eyes on the future rather than the present. It seems a bit overblown. These four teams all have at least one superstar playing at their peak. That tends to lead to a lot of wins in bunches, regardless of who’s on the schedule.

At least one of these streaks ends tonight, when the Warriors and Blazers go at it in Portland. Steph is out with an ankle injury and it’s a back to back for Golden State after a thrilling, but taxing, comeback victory over the Spurs last night. Things are lining up for Rip City. The Rockets play at East-leading Toronto in the game of the night and New Orleans has a tough one with the Wizards coming to town and Davis nursing an ankle injury.

Who knows, maybe we’ll only have on huge winning streak come Saturday morning. 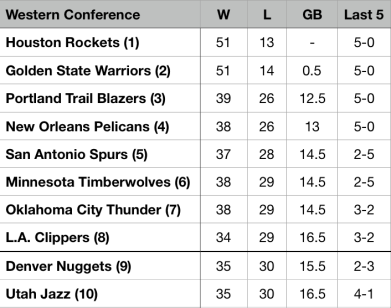 Rockets @ Raptors – I like the Raps here, but I’ve also vowed not to pick against Houston during this streak. Rockets in a thriller, 118-116.

Wizards @ Pelicans – Will the Brow play? Probably not. So the Pels streak stops here. Wiz take it 108-94.

Lakers @ Nuggets – Ugghh, who knows with Denver? I could see Lonzo Ball carving up the porous Nugs D and getting all the Lakers fans that go to games in Denver fired up. But Brandon Ingram is also likely still out. I’ll shakily take the Nuggets, 122-117.

Cavaliers @ Clippers – LeBron’s starting to get that look in his eye (see: total 4th quarter annihilation of Denver Wednesday). I like his Cavs in a tight one over the Clips, 108-105.