It’s April and that means the season is effectively over for a number of NBA teams. We’ll be picking through the remains of the fakers, pretenders and never-had-a-chancers to determine what went wrong. This entry will be unique, as we are mourning two teams simultaneously, as they are forever linked due to their collective disappointment. Everyone is to blame in the demise of these two.

We lay to rest the Chicago Bulls and Washington Wizards together, two teams that half-assed their way through disappointing seasons, and thus, don’t deserve separate graves. 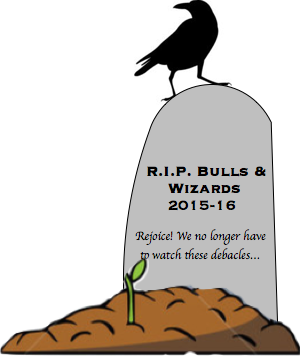 Postmortem: In a deviation from our normal NBA Graveyard format, let’s take a quick look at the Bulls’ and Wizards’ failings at each level of the organizations. Everyone fell short of expectations, starting with the men upstairs:

General Managers – The two-headed “brain” trust in Chicago – Gar Forman and John Paxson – has exhausted all its goodwill with Bulls fans after torpedoing the Tom Thibodeau era. Before Thibs, Paxson got in an altercation with coach Vinny Del Negro. He skated past that incident since Del Negro wasn’t long for the job anyway, but Thibs – for all his faults – produced winning seasons. Recent leaks have suggested that last season Pax and Gar went behind Thibs’ back and told the players they didn’t have to listen to the coach. If true, wow. Quite the treachery on the part of the front office, just to open the door for their hand-picked and overmatched replacement, Fred Hoiberg. As Mark Wahlberg would say, “This shithole has more leaks than the Iraqi Navy.”

As for Wizards GM Ernie Grunfeld, in a last-ditch effort to make the playoffs and save his job, he traded for malcontent Markieff Morris, giving up what would become a 2016 Lottery pick to Phoenix. Whoever gets his job next should get to give Grunfeld a steel-toed kick to the ass as a first order of business.

Coaches – Hoiberg alienated the team by making Joakim Noah come off the bench to start the season. He struggled all year to figure out a rotation and played guys increasingly strange minutes. He fought with Jimmy Butler behind closed doors and in the media. Under his leadership, the once defensive-minded Bulls lacked effort on D and gave up a ton of points. This was an abysmal debut.

Randy Wittman almost got fired last season before his Wizards made a run in the playoffs playing small-ball lineups. He tried to make the small-ball thing work this season but didn’t really have the personnel for it. He was promptly fired as soon as the season finished last night in a move that surprised nobody.

Players – For the Bulls, they have a real problem in Jimmy Butler. Unfortunately the once-humble guard became something of a diva after signing his big contract, which was first reported early in the year by ESPN Chicago’s Nick Friedell. I didn’t believe it at first, but more and more reports have trickled out; the proverbial smoke that suggests fire. The Bulls need to decide if they are married to Jimmy or if they’re better off trading him in a complete tear-down. Pau Gasol and Noah are probably on the way out via free agency, and Derrick Rose has another year left on his contract. The only real bright spots on the roster came from E’Twaun Moore (a free agent this summer), rookie Bobby Portis, Doug McDermott and toward the end of the year Nikola Mirotic. They should rebuild around that young group and try to re-sign Moore.

The Wizards had high hopes to challenge the Cavs this year, but John Wall showed up a bit out of sorts and Bradley Beal couldn’t stay healthy. Otto Porter never developed into the reliable three-point shooter they needed him to be, while Nene and Marcin Gortat got a little older and phased out in small-ball lineups. They will take a run at Kevin Durant, but I don’t expect that to bear any fruit.

It’s back to square one in many ways for both of these fake-contenders.

Normally with these Graveyard posts, I put together an asset ranking and offer thoughts on free agency and other areas of hope. But in a silent protest against these two depressing teams, I will abstain. The less ink we waste on the Bulls and Wiz the better. I’d much rather spend the time on Utah, the team that will round out our 2016 NBA Graveyard features – coming tomorrow.

One thought on “NBA Graveyard 2016: Two Abrupt Falls From Grace”