It’s April and that means the season is effectively over for a number of NBA teams. We’ll be picking through the remains of the fakers, pretenders and never-had-a-chancers to determine what went wrong. More importantly, what can be salvaged going into next season and beyond? Cuz the great thing about the NBA is even when all is lost, the dead still have hope. There’s always room for wild optimism thanks to coaching carousels, the siren song of the big free agent, the franchise-saving Draft pick, the unknown potential of young assets and blind faith.

The Orlando Magic showed surprising life early in the season, before flatlining in the dead of winter… 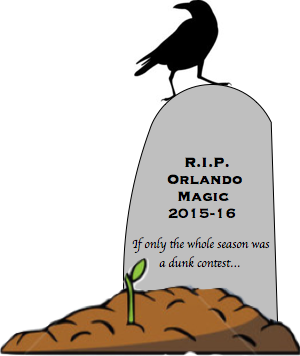 Postmortem: Orlando’s season can be summed up as the tale of two calendar years. With multiple high Lottery picks playing key roles they came into the season as an intriguing, if incomplete, team. New coach Scott Skiles brought a reputation for turning young teams into playoff contenders quickly and in 2015 this season looked to fit nicely into that pattern. The Magic tread water out of the gate and found their stride in late November/early December with a five-game winning streak. Guard Victor Oladipo exploded for some big games (highlighted by a triple-double vs. OKC in second game of the season) and contributions from Evan Fournier, Tobias Harris and star center Nikola Vucevic were consistent. By the end of calendar year 2015 they stood 19-13, good for 5th place in the East. The playoffs – a distant memory since the days of Stan Van Gundy – suddenly seemed in play.

Then 2016 happened. Orlando kicked off the new year by losing 15 of its first 17 games. The writing was on the wall. Now 13-30 in 2016 and 32-43 overall, the Magic are Lottery-bound for the 4th straight year, remaining mostly anonymous to the casual NBA viewer. Well, there were two headline moments still to come for the franchise: Aaron Gordon and the Magic mascot thrilled the world at the Slam-Dunk Contest. Then the Magic traded Harris to Detroit for Brandon Jennings (and Ersan Ilyasova), creating competition at the point guard position for mercurial 2nd-year starter Elfrid Payton. One of the bigger moves of a quiet trade deadline, at least Orlando got some ink.

So the question remains: were the season’s first two months fools gold? Are they actually the team that saw implode its chances starting in January? The answer probably lies somewhere in the middle. Though stocked with young talent, the Magic have no discernible star player. The closest they have is Vucevic, who you can count on for 18 and 8 per night, but is hardly a cornerstone in a small-ball league. Vucevic isn’t a rim-protector, nor is he very versatile on the defensive end. He does much of his damage offensively on post-ups, which just aren’t very efficient and don’t make the rest of the offense better aside from the occasional kick-out three. Oladipo shows on certain nights that he can be an alpha dog scorer and defender. But he’s yet to do it consistently, and he struggles to finish at times. He ranks last on the team at 31% FG from 3-10 feet out. Payton is a difficult case – you can see his court vision and knack for setting up teammates, but he just can’t shoot at a starting point guard-level. His 3-point percentage has improved from a dismal 26% in his rookie year, but his overall field goal percentage is still just 44%. It’s the Michael-Carter Williams dilemma the Bucks face – opponents have to respect your point guard’s shot in order to open up space in the half court. The rental of Jennings – fresh off an Achilles injury – hasn’t solved the Magic’s point guard problem.

The team drafted exciting rookie Mario Hezonja last summer as a dynamic offensive threat who provides much-needed 3-point shooting. But Skiles has buried him on the bench this season so he hasn’t found a rhythm. Gordon dazzles with his athleticism, but is scoring less than 10 points per game as he struggles to find his game on a consistent basis.

Honestly the problem may be they have too many cooks in the kitchen. Skiles routinely plays 11 guys in a single game. You can make the case this is an OK strategy toward the end of the season to get a look at what you have to work with going forward. But big rotations tend to have a negative effect on players’ confidence and feel of the game. Another Lottery pick will soon be added to the mix – barring a trade – so the roster will get even more murky for Skiles.

Low Moments: It doesn’t get much lower than a 2-15 stretch that erases all early season momentum and knocks you out of the playoffs for good in one fell swoop.

Bright Spots: This team needs a personality to build around, so even though the Dunk Contest is a trivial exhibition, it vaulted Gordon and the Magic into the public consciousness. His game still needs work, but there’s a chance he becomes that elusive face of the franchise, and the 2016 Dunk Contest was his coming-out party.

Coming off the bench in a March 23 loss to Detroit, Payton put up a 20-10-10 triple-double, showing why he was a Lottery pick and a tough guy to give up on. His 43% shooting in the game undermined his efficiency, and therein lies the problem.

Center Dewayne Dedmon, who earned a spot on the team after signing a 10-day contract in 2014, has produced recently, scoring 18 points in a win over the Bulls. His dirt-cheap contract is up this summer, but the Magic may want to re-sign him for front court depth and the feel good story of it all.

Oladipo had 45 points in a recent loss to the Cavs. The potential is there for this kid to become a stud.

Assets: As mentioned, the Magic are loaded with blue chip talent that’s yet to fully come together. They also have their own 1st Round picks for the next several years and they’re yet another team with a truckload of cap space. Here’s an asset ranking:

Free Agency prospects: The Magic have five players  on expiring contracts they will consider re-signing – Fournier, Dedmon, Jennings, Jason Smith, Andrew Nicholson. They should let Jennings go, and only re-sign one of the two centers (Dedmon and Smith). Dedmon is much younger and can be a solid backup, so he gets my vote. Fournier has been one of their most consistent scorers on the wing and though he’ll command a fairly sizable pay day, it’s worth it to bring him back. Nicholson has had his moments (24 points vs. Brooklyn Tuesday) but he doesn’t see much time on the court. He’s a toss-up.

As for free agent targets from the outside, there’s buzz they may try to bring Dwight Howard back, but that seems a fool’s errand. He’s on the clear downslope of his career and will cost a fortune. The point guard market is thin this season. They can always use three-and-D wings, such as Nic Batum. Depending on whether they re-sign any of their own free agents, they’ll have between $30-50M in cap space, so expect plenty of offers to be made.

Resurrection Scale: 50% (Stuck in NBA Purgatory) – It’s been said many times that the worst place to be in the NBA is in the middle. With the 18th best record, that’s right about where the Magic find themselves. A big free agent signing or trade involving Payton and Vucevic can swing that. If they rely solely on the draft (late-Lottery) purgatory will continue to be hard to escape.