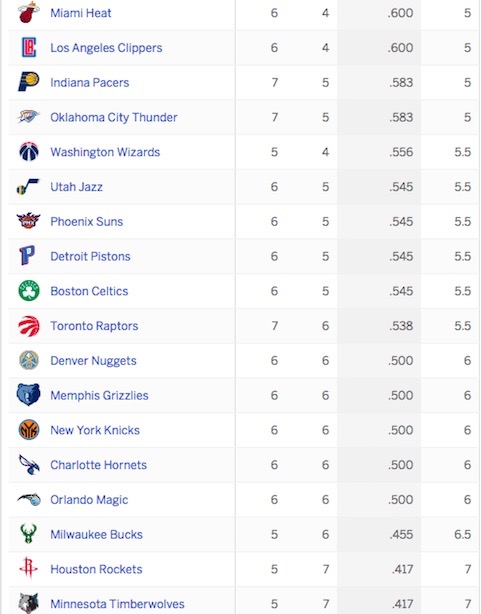 There’s something interesting going on in the National Basketball Association that would make Bernie Sanders proud. The middle-class is expanding rapidly. Expected top-tier teams are being taxed, so to speak, by injury, chemistry issues and the weight of high expectations. Meanwhile, projected bottom-feeders are rising above the poverty line in alarming numbers as talent has increased league-wide and rising teams are finding their identities.

I’ll caveat this all by pointing out that it’s still November. In two months the market may have corrected with the rich getting richer and teams showing unexpected promise may tumble. There’s plenty of time for last season’s cream of the crop to rise into the top conference seeds, aside from New Orleans and Brooklyn. But for the time being, class lines are blurry, traditional tiers are dissolving and ultimately it’s gotten really freaking hard to put together a Power Rankings.

The Warriors stand alone at the top. They are the Koch Brothers, Bill Gates and Trump sipping Brandy in the parlor room. The 76ers, Nets, Lakers and Pelicans occupy the bottom rung, foraging for moral victories. Just about everyone else falls somewhere in the widening middle class. There are 18 teams that are within two games of .500, either at, above or below the median win income.

This is a net positive for a league that has seen just 10 different champions in the past 35 years (Lakers, Celtics, Pistons, Bulls, Rockets, Spurs, Heat, Mavericks, Warriors, 76ers). Of course, that number will remain the same if Golden State continues its torrent through the league en route to a repeat championship. But taking the long view here, the more average to potentially good teams there are, the less predictable the season becomes and the potential for haphazard playoff surprises increases. This equals more fun, more fanbase hope and more general interest in the outcomes. Just look at what parity has done for the NFL.

Will this be a blip on the radar, or a continued pattern? Time will tell, but it does seem teams are getting smarter about roster construction and the value of draft picks. Bottom feeders in small markets like Detroit and Minnesota suddenly have a jolt of energy and identity. Of course, the jump in cap space could bring us back to a world dominated by Los Angeles, Boston, Miami and other big markets. Or it could create more chaos, as smaller market teams suddenly wake up with deeper pockets.

For now, let’s embrace the unpredictable and take a stab at the Power Rankings, with each team’s record listed and some words about their identity.

4. Atlanta Hawks (9-5) – New money, gets to sit at the table but no one considers them a threat to take over.

5. Chicago Bulls (8-3) – Having an identity crisis. Are they a run and gun team? Well, they rank pretty low in points per 100 possessions. Do they lean on defensive principles from the Thibs era? Up and down on that side to say the least.

6. Dallas Mavericks (8-4) – The guru coach and grizzled veteran team led by an ageless German. I suspect the early success is superficial, and in a town where plastic people drive ’98 BMWs to give the impression that they’re wealthy, there’s solid team-city synergy here.

7. Oklahoma City Thunder (7-5) – Trying to stay afloat with KD injured and a horrible defense. Luckily they have Russ.

10. Toronto Raptors (7-6) – Fast starters that struggle to finish games. Defense is on the rise.

14. Washington Wizards (5-4) – The small ball team that can’t figure out how to defend bigs.

17. Memphis Grizzlies (6-6) – Stagnation personified. The last days of grit n grind may be upon us.

18. New York Knicks (6-6) – All it takes is a healthy Carmelo and a freakish Latvian rookie to inject life back into the Big Apple.

19. Charlotte Hornets (6-6) – Raining threes, constant attacking and pace. The Hornets are playing the Rockets model better than the Rockets.

20. Orlando Magic (6-6) – The Young, Exciting Talent & Hustle Squad. Will lose more close games than they win due to inexperience but all their games seem to be watchable.

21. Denver Nuggets (6-6) – Another surprise riser. Michael Malone has them believing; love the play of Gallo and Mudiay.

22. Minnesota Timberwolves (5-7) – Hard pressed to find a better pair of under-21 anchors on the same team in recent memory. Andrew Wiggins and Karl Anthony Towns make this team must-see TV.

24. Milwaukee Bucks (5-6) – Their defense made them dangerous a year ago but it hasn’t showed up this season. Offensively they look good and Jabari Parker keeps getting better. Work cut out for them to make it back to the playoffs.

25. Portland Trail Blazers (4-9) – You knew it’d be tough with all the personnel losses they endured, but Damian Lillard and CJ McCollum have been electric on offense.

26. Sacramento Kings (4-8) – Their breadwinner, Demarcus Cousins, can’t be counted on due to injury and suspension. Pleasant surprise that Rajon Rondo has turned back into a triple-double machine.

28. New Orleans Pelicans (1-11) – The M.A.S.H. unit that’s getting screwed out of their disability benefits.

29. Brooklyn Nets (2-10) – The Underwater Team, as they’ve mortgaged most of their future assets.